Why is it so important to keep an open mind? 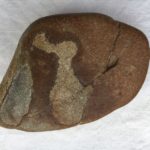 Have you ever limited yourself by making a snap decision; choosing the clearly obvious and correct answer but not even taking an extra moment to search out other possibilities, other solutions? The results of such a harried and narrow view will certainly limit your possibilities and can sometimes prove to be disastrous. Here is the lesson I learned about keeping an open mind – in business and in life.

The rivers of Montana have spent thousands of years washing over rocks and pebbles and turning them into wonderful and marvelous objects of art. I collect heart-shaped stones. Not those quartz hearts cut and polished in tumblers, but real ones, nature’s own marvels I’ve discovered in riverbeds and on beaches. My family knows all about my obsession and still today when they’re out on their trips, they’ve told me that they constantly look down in hopes of finding that perfect stone.

When the kids were younger and their Grandpa George would take them out fishing, I usually tagged along. And while they would bait their hooks and try to snag a whopper, I’d walk along the banks of the Middle Fork River, enjoying the sounds of the water and the wind while searching the rocks for that unique heart shape. One day I kicked through the pebbles and found a truly unique stone. It was a reddish-brown color with a light-brown shape embedded in its center. When I first picked it up and looked at it, I said, “Wow. This looks just like a duck.” It really did. There in the middle of the stone was the silhouette of a duck—beak, body and tail. Later, when we got back to the cabin, I excitedly handed my kids the rock, asking if they saw the duck.

They studied the stone and then looked at me quizzically. One of them finally said, “No, that’s not a duck. It’s a rabbit.”

And sure enough, when I had handed them the stone, the way it lay in their hands, that light brown center created the image of a rabbit—body, head and ears. Curious now, we gave it a quarter turn and looked at the new image. This time we all saw the same thing. It was a whale breaching the surface for air. Now, that was amazing—one stone, one pattern and we all clearly saw three unique images. There is a fourth when you make the final quarter turn, although it’s a bit harder to decipher. The best we can come up with is a dead whale—so we generally stop at the three images.

The point is (or in this case, the two points are) – how often do we make a snap decision about a situation or a person and are content with our first observation, or our first decision? There’s nothing necessarily wrong with it—yes, it does look like a rabbit—but I was so excited about the rabbit, I forgot to look for other possibilities. I was amazed, but satisfied. But there were more possibilities.

The second point is that it took my kids, other people, to help me see the different images. And when they pointed it out to me, I was open to their observations and saw it immediately.