By Philip Martin September 24, 2020 No Comments 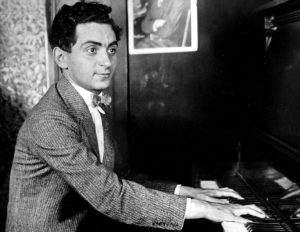 September 22 marks the death of one of the most influential composers in the history of American Music: Irving Berlin.  In the first half of the 1900s, Berlin was able to capture America’s burgeoning energy and put it into song.  Here are just a few of his memorable standards:

For all of this musical genius there’s a fascinating sidebar: Berlin couldn’t really play the piano!He couldn’t write music. He couldn’t read music. Of the more than 1,000 songs he wrote, everyone was composed in one key, the only key he could play in, F-sharp (all the black keys). To make his songs work for the singer’s different ranges, he had a special piano made just for him. It is called the Weser Brothers Transposing piano. On it, there was a lever that allowed him to move all of the keys up and down the keyboard; thus, while still composing on the black keys, the songs were now in the range of whoever was going to sing the song.

Berlin did not see his limited piano skills as a liability. He accepted them and moved on to create a true treasure-trove of American classics. For me, I play a little piano, and frequently I find myself saying I wish I was a better pianist. Then I tell myself that while I still have time to get better, I should focus on the good skills that I do have. The skills I do not have should not limited in my creativity.